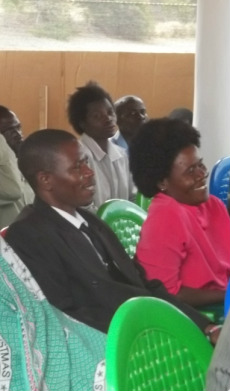 Harrison Chinyama—founder and director of THM—first saw the need for this type of organization in 1987. He has devoted his life to that vision and Timothy Harvest Ministry since that time.

Harrison’s vision for THM was to develop ways to more effectively deliver the message of salvation through Jesus Christ to the spiritually lost—primarily in small villages in rural and remote areas in his native Malawi. God promised that if he diligently pursued this calling the necessary tools to do so would be provided along the way. God has been faithful to that promise. More than 250 churches have been planted by THM and local pastors have been trained to serve these churches.

Another aspect of Harrison's vision was the creation of Bethel Training Center. That promise is becoming a reality.

Throughout the past 15 years, my King of Kings the Lord God Almighty and Father by grace which is through Christ Jesus the Son of God by right, the leadership style of Jesus Christ has always been my delight.

As the Lord allowed me into the year 2013, Servanthood has appealed to me even in a much stronger way. When I try to meditate and analise on this topic, I still come back to the same fact and truth that if we re to be used of God in a way that pleases Him. We have to accept to be servants.

The bible tells as that we are a royal priesthood according to 1st Peter 2:9. This has been embraced by many Pastors beyond it's context so much that they have forgoten that God has called as to be servants. It is through the servant spirit that the world was saved by the sacrificial death of Jesus Christ on the cross of Calvary.

It is very impossible for men and women of God to leave their confort zones without the spirit of servanthood. Jesus made a decision to be a servant for the sake of our salvation.

Throughout the ministry of Jesus Christ, we see Him serving rather than being served as a result the chief tax collectors, the great fishermen like peter and John were able to leave their wealthy and followed this servant called Jesus.

Without becoming servants we cannot reach out to the rural masses with the gospel.

The great commission command tells as to go out to the world and not the world to come to us. Due to lack of servanthood, men and women of God now are inviting people to come to them. Technology and blessings has made most of todays' preachers to forget that they are called to be servants.

May I urge my fellow preachers today that the invitation to servanthood is as fresh as it used to be at the time of Jesus Christ. If Jesus Came to serve not to be served, why do we want to be served? Jesus showed as His spirit of servanthood right from way He left His heavenly glory until the time He finished saving the entire human race in His sacrificial death on the cross of Calvary. If other preachers are not ready to be servants, please stand with me in your prayers as I place myself under His feet to be made a servant.